15 replies to this topic

So decided to share a bit of my three day experience with BlackBox on windows 8.   First thing I noticed is that bsetshell.ehe not completely solve the problem startup blackbox as alternative shell (just after launch explorer.exe loaded standard interface). This is due to the fact that bsetshell.ehe replaces only the value in the registry branch HKEY_CURRENT_USER. Well this is not a problem change value in KEY_LOCAL_MACHINE, that solves the problem (at the end I will describe how to change, but doubt that anyone who reads this does not knows). Attention!! when you completely replace shell to blackbox is as a result no metro interface, no side settings panels (this applies for wi-fi settings), but in the blackbox system tray will appear all system icons

. The second problem was the Ribbon interface explorer.exe, with him bbleanskin looks awful.

This solved with a simple program OldNewExplorer that returns the old view from the windows 7.

Today I was faced with a third problem, I work in the field of windows phone / windows apps development, and there is

As it turned out, and WS XAML style designer not want to work without the default shell (only this situation with wp/w8

). It turns out totally refuse from windows shell is impossible.

Well then come back to the first problem, just when we fit the system shell loaded with explorer. And only an extra taskbar remains

and it is treated through a third-party application Taskbar Eliminator.

Will advise or question, I gladly hear them.

Well now how to replace the shell in the registry.

Create a txt with the code

rename from txt to reg, and start.

To bring back just write the instead of the path to blackbox explorer.exe

If bsetshell doesn't work, there are always stand alone shell switchers/managers like ShellOn that can make this task easier - with the added bonus that you can choose shells on startup (Explorer, Blackbox, Litestep, whatever) AND you can always catch a crash. I use ShellOn V2 on both XP and 7 machines. Haven't tried it on 8 (I hate this OS... lol) but I see no reason why it shouldn't work.

Its very risky not to use shellon or some such program.Assuming you have the courage to go to windows 8.1.1 and have not used another program to kill the charms bar ect. blackbox itself will get you there.I used to program alarm system control set e-proms and was suprised to learn what we used to create nested keypads is exactly how the very latest version of windows operates.What I'm saying is your best bet is to eliminate any other anti-modern screen programs and leave the rest to blackbox and work from there.I had an issue with a samsung update that I had to dump because it activated the nesting feature that on every reboot would change the values.Just a cautionary tale for you all.

I admire your bravery and I am surprised to see that the XAML designer depends in some way on the shell in W8.1 (it doesn't in W7).

Can you track down the problem a little further, like post the stack trace or at least the inner exception of the COMException?

Since I'm a newbie to Blackbox I found that when you use BBlean 1.17,1 64bit I had it installed with the vey basic,I had to copy over files from

[color=rgb(34,89,133);]Mojmir's New Blackbox Build to have a clean look . The quirk for the wifi I will work on later, much later as I'm just learning the basics. I used pitkon ERupting with all the great work and I have a range of options but I need to learn more before I can submit anything else. It was an experience worth the effort. I really dislike windows 8.1[/color]

At first I could only get the build posted by diabol to start. Every other build just gave me a blank screen with no error or anything. Suddenly every build works...  I guess I have "Super Happy Fun Time"-Mode still activated somewhere in the Windows-8.1-Settings.

Thanks for your tip with the Registry and OldNewExplorer!

Love this OS by the way. When I wake up my PC via Keyboard, it wakes up and then the Keyboard stops working till reboot. When I wake it up with my mouse everything is fine untill my mouse stops working when i operate it to fast (High-Speed-Drag-n-Drop is a hobby of mine.)

Thanks to Windows 8.1 I can finally bleed hate out of multiple body orifices with no sweat at all.

Okay. Now i got it. It seems Logitechs Setpoint-Software disturbs the start of blackbox... It seems that all the misfunctioning builds had bbkeys activated. I am going to investigate further.

OldNewExplorer didnt work constantly so I decided to just rename UIRibbon.dll (System32-Folder). Broke Wordpad and Paint. (Guess how many rats a**es I give about that)

It seems the other builds crashed most of the time because of bbleanskin. I also needed some [color=rgb(80,80,80);font-family:'Segoe UI', 'Lucida Grande', Verdana, Helvetica, sans-serif;font-size:13px;]Microsoft Visual C++ Redistributables. I have to note that I needed x86-versions of the redistributables even when using the x64-builds.[/color]

I am running on 8.1 right now. Only thing so far is I cant set the background unless I am doing it wrong.

did you try and run into problems, yet? 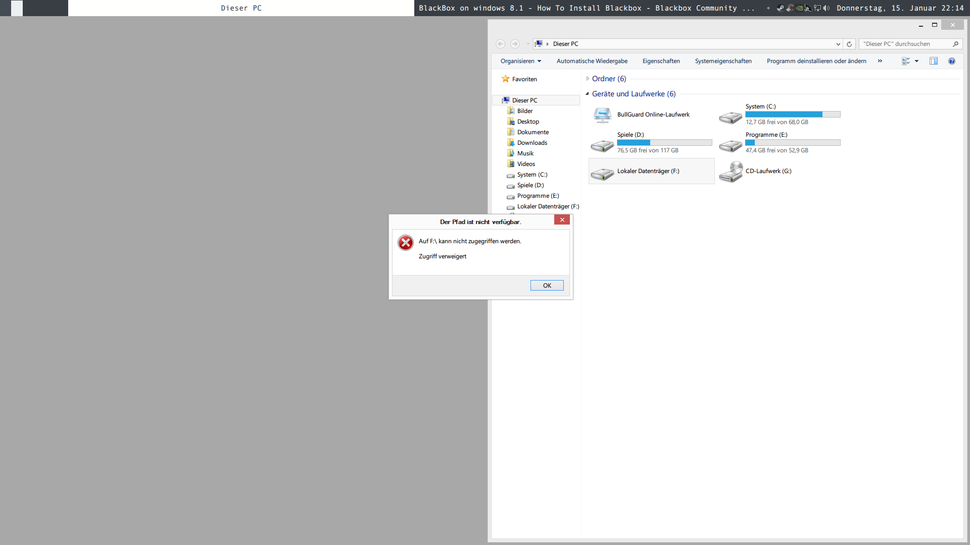 I guess there's something in explorer's startup which blackbox ignores?

I would check the services, autoruns (there's a tool from sysinternals for that) and the actual processes which explorer starts when you bring it up as default shell.

Back to How To Install Blackbox

Also tagged with one or more of these keywords: BlackBox, windows 8